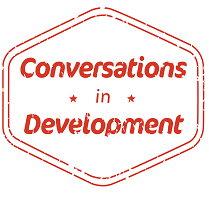 Released this month, former World Vision Australia CEO and current Chief Advocate Tim Costello joins the Cufa podcast series Conversations in Development as a special guest. So far the podcast has looked at a range of diverse issues from the international development field varying from child labour to sport for development.

The values of giving are deeply rooted in the texts, traditions and practices of many faiths, and many of the world’s biggest aid organisations are faith-based. In this episode, the podcast explores how faith-based aid differs from secular aid, and how much those differences matter. Australia is becoming more and more secular, but the majority of the country’s biggest charities are faith-based. The podcast asks what happens when faith conflicts with what is best for poor or developing communities and it considers if faith-based aid takes the pressure off the governments in developed countries to contribute to ODA.

Tim Costello is Chief Advocate at World Vision Australia and is one of Australia’s most sought-after voices on social justice issues, leadership and ethics. He has spearheaded public debates on gambling, urban poverty, homelessness, reconciliation and substance abuse. He has been instrumental in ensuring that the issues surrounding global poverty are on the national agenda. Tim was ordained as a Baptist Minister in 1984 and he established a vibrant and socially active ministry at St Kilda Baptist Church. He has served as Mayor of St Kilda, Minister at the Collins Street Baptist Church and as Executive Director of Urban Seed, a Christian not-for-profit outreach service for the urban poor.

Get up to date with the podcast by listening to this, or previous episodes. Simply search “Conversations in Development” into Apple Podcasts or your favourite streaming service. Episode 9, Faith and Aid streaming from Monday 21 January 2019.